Mille Miglia - A Dream on Hold

There is a road trip still to be done, a drive still to be driven. A route to be followed, a dream still to be chased down. For us it is the route of The Mille Miglia. Carpe Viam!
This page is all about the Mille Miglia. Quite simply it is a dream of ours to go and see this race and drive the route. We intended to go in 2010 but for us it proved a dream too far that year and it was not to be. 2011 has been ruled out due to my more pressing battle with the BIG C. So for now it is a dream on hold but not forgotten. Have a read below and maybe it will become one of your dreams too!
Late 2012 and I am one scan good after my second liver resection we almost dare to dream and dates have been put in the calendar for 2013 to drive the route! Early days and another scan to get through first but at least the dream has been rekindled.
Update. April 2013. My second scan was clear and now it is all systems go for the road trip and we have created a Mille Miglia Blog to outline the planning  and to relay the trip adventures on.
Check out our Mille Miglia Board on Pinterest

Mille Miglia - The Essence and The Inspiration

“To me the Mille Miglia was certainly the finest road race of them all, but although I loved it, I was always afraid of taking part…. In 1955 when I won in the Mercedes with “Jenks” we were travelling at up to 180 mph on open roads. Although the brakes were very good – there was a constant nagging fear that if anything went wrong there was nothing we could have done about it. We had a fabulous drive and it was nice to make a bit of Mille Miglia history together, as my time of 10 hours 7 minutes 48 seconds at an average speed of 98.53 mph for the 1,000 miles was never beaten”  -  Stirling Moss 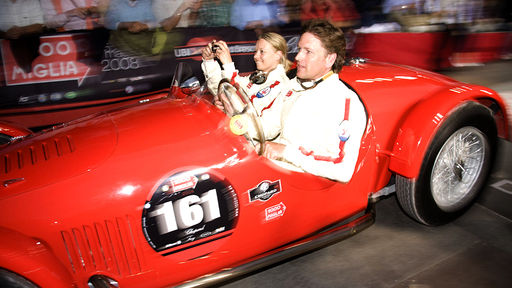 James Martin set his sights on the gruelling Mille Miglia, the annual 1000-mile race through Italy in which over 300 classic cars compete. In its infamous history it has tested the talents and endurance of such legends as Fangio, Nuvolari and Sir Stirling Moss

Ever since he was kid in Yorkshire James Martin has been mad about cars. Now a successful chef, he has put his money where his dreams are and has a garage full of Formula One cars, American classics and oddball delights - from hand-painted Harleys to bubble cars, fibre glass cross-country rough riders and a newly restored Mustang with all the trimmings.

Having the power hasn't been enough - he wants the glory too. So he sets his sights on the Mille Miglia. Taking part has always been a dream for James. He searches for the right car and the right co-driver, and the costs mount as the day of his dreams draws near. In Italy, the support crew, girlfriend Sally and his real pride and joy assemble. The 1948 Maserati has left a 800 thousand pound hole in the Martin finances - a lot of omelettes.

Will the car stay the course? Will Sarah measure up? Is James as tough as he thinks he is? Can a non-Italian actually win? Can he beat the three other competitors with whom he bets on the race? Do the Italians always drive on the right? Should he have bought an English car instead? Crucially, what makes 700 grown men and women drive headlong through the elements for three days with little sleep and less comfort than offered by a sit-on lawn mower? We watched James Martin compete in the Mille Miglia in the programme as above, shown on BBC2 in January 2009. We were inspired by the documentary and immediately made a promise to ourselves to see the race and one day drive the route. The programme also mentioned Stirling Moss' record breaking time to complete the Mille Miglia in 1955. A 1000 miles at an average speed of 98.53 mph in 1955 on normal roads! To me the most amazing achievement in Motor sport history. This one single fact sums up the very essence of this race and its importance in Motorsport history.

The first  Mille Miglia was in 1927 and in torrential rain. The history of the Mille Miglia breaks down distinctly into pre and post war segments. In the post war decade from 1947 to 1957 the event was rapidly re-established as a world leading competition. Major sports car manufacturers would enter works cars employing some of the top drivers of the day to win the 1000 Miglia for them. Enzo Ferrari said “The Mille Miglia created our cars and the Italian Automobile industry”.


The background of the 25 Mille Miglia Historic RevivalsIn 1977, to mark the fiftieth anniversary of the 1000 Miglia Cup, the Brescia Automobile Club decided to organise the 1000 Miglia Rally on local roads, as a regularity event with competitive speed trials - a format already adopted for the last three Mille Miglia races organised from 1958 - 1960, which were classified by the FIA as qualifying events for the European Rally Championship.

On the fiftieth anniversary, building on the growing interest in vintage car collecting in Italy and elsewhere, they also organised a revival of the race from Brescia to Rome and back. It was reserved for historic cars and final standings were based on the results obtained in the precision driving tests organised along the route.

Reviving the event over the longer, historic route required a permanent organisational structure backed by institutional support and adequate financing. Consequently some of the promoters of the revival became organisers, working with the Brescia Automobile Club, the owners of the name and the trademark. In alphabetical order they were: Gino Danieli, Costantino Franchi, Giuseppe Lucchini, Vittorio Palazzani, Manuel Vigliani and Enzo Ziletti: a group of friends who, as Lucchini recorded in the 1982 Mille Miglia yearbook, were modern versions of the original "Four Musketeers".

The new structure was in place by 1982 and organised the second historic revival - the first to start from the traditional platform in Viale Venezia. Similar revivals were organised in 1984 and 1986.

By 1987, the growing number of entries, which had increased from 220 in 1982 to 350 in 1984, persuaded the organisers to abandon the biennial format in favour of an annual event, a decision that was welcomed by enthusiasts, who responded by submitting no fewer than 580 entries that year.

At the same time, the organisers of the revival, under the direction of Costantino Franchi until 2007, requested and received permission from the authorities to increase the number of cars at the starting line-up and, from 2002, this was set at a limit of 375 cars: a 'mobile museum' over one kilometre long, made up of cars built between the 1920s and 1957.

Although the number of cars admitted now is almost four times the number that participated in the first revival in 1977, fewer than half of the applications received each year can be accepted. This has been a problem since 1955, when 521 teams were at the start in Viale Venezia, forcing the organisers to make a drastic and unpopular reduction in their number - mainly for reasons of safety, related to the drivers' experience and the ability of the registered cars to withstand the rigours of the race.

Today, limiting the number of participants allows the organisers not only to select cars that are the most significant in the context of race history, but also to offer spectators a cavalcade that is almost unique, portraying thirty years of the evolution of motor racing, from 1927 to 1957.

The historic revival not only inherited the symbols and part of the route from the historic Mille Miglia, but also its spirit - although the modern race offers competition in different forms, no longer limited to pure performance, as D'Annunzio would have liked, but sensibly combined with entertainment and tourism.

Times have changed in the eighty years since the first 1000 Miglia Cup was contested. In 1927 it was important to appeal to the collective imagination of future motorists with an unusual race that could demonstrate the reliability of the standard production models competing. The "Four Musketeers" also realised that, in an age when the channels of information were few and far between, it was important to display the cars, taking them to the front doors of potential purchasers.

Today's organisers have tried to retain as much of the original spirit as possible and, for example, in 1996, they introduced special ranking coefficients to encourage drivers of the older, less competitive cars, that were also more difficult to drive.


The Mille Miglia has become a pinnacle of its type for serious collectors to participate in. Only the very best cars in the world of the types that took part in period are selected.

Mille Miglia in HDR - Courtesy of Charlie_90 on Flickr