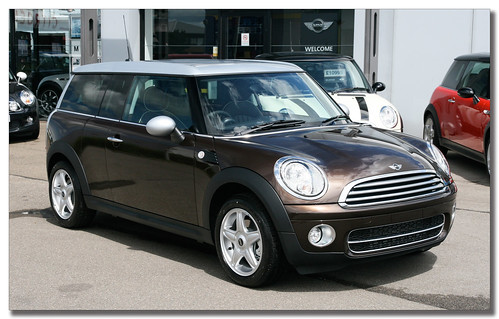 When the MINI Clubman came out I was soon tempted away from my Cooper S Works not least by its promised economy compared to the dismal fuel economy of the S Works. A Cooper D it was then, in the superb shade of metallic brown other wise known as hot chocolate - a Clubman only colour at the time. The interior is trimmed in a matching chocolate lounge leather with cream piping.
After the modified Cooper S the Diesel could have felt a bit underwhelming but in practice the two are not too far apart on a cross country blast, with the torque of the oil burner making up for its lack of outright power. My Cooper D however, packs a harder punch than standard thanks to a P - Torque remap, which makes it a much more driveable machine. It pulls better in all gears - put your foot down on a motorway and it really goes, especially with the recent addition of a sprint booster.
Economy hasn't suffered either with 45 to 50  being easily achieved even when pushing hard and an even more frugal  65 - 70 mpg is possible if you drive it like the cloth cap brigade. 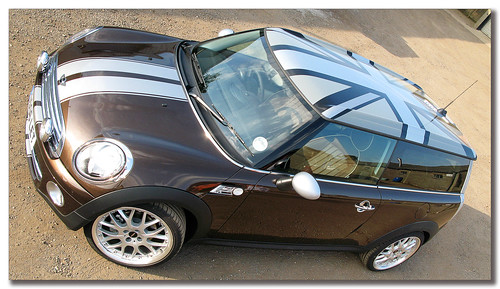 The Clubbie was handsome straight out of the dealers but it wasn't long before the changes started. First stop was a visit to MINI Pirate for a full makeover to give her my trademark Union Jack treatment - so a UJ roof and vipers front and back. 18" R 90 replica alloys completed stage 1 of the new look.


The modding had only just begun and soon the alloys were changed again to a much meaner looking set of MAK Volare 7.5 x 18 rims shod with Yokahama S drives. To complement this, the car was lowered approximately 30mm on Eibach springs and a JCW Clubman spoiler soon appeared on the back.

Next JCW Brembo brakes were added to give the car the stopping power to match the P-Torque remap. Silver side skirts and UJ A - panels were then fitted and this almost completed the exterior look of the car. Finally, 4 spots on the front - a rare sight on R55/56 MINIs - union jack mirrors and a UJ interior mirror did complete the look of the car. 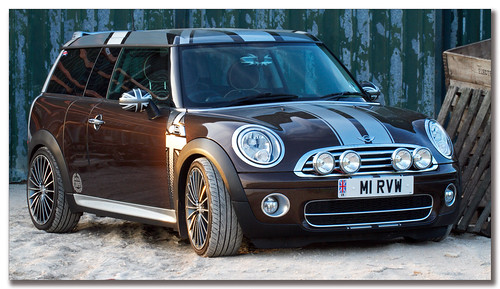 In 2 and a half years of ownership she has covered 34 thousand miles including three large  European tours  taking in the Pyrenees, Barcelona and Monte Carlo and it is on these longer trips that the extra room in the Clubbie really proves its worth. The car has been a pleasure to own from day one and I look forward to many more adventures in it still to come. 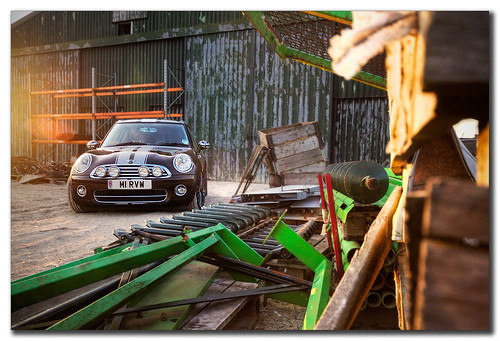