This is a little story about my current MINI, named 'Shadow'. It is a 2009 Cooper S in Midnight Black metallic, with a Redwood Red Leather interior. 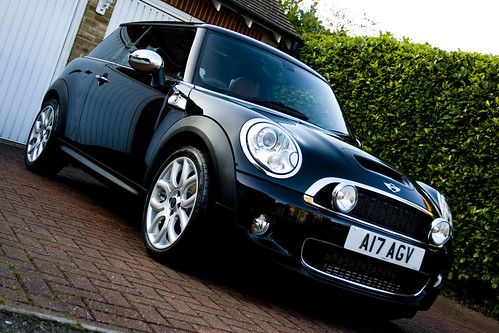 I ordered the car back in December 2008, just as the MINI factory was about to close for the holidays. I had been waiting for the moment for ages, in fact I had wanted to own a black MINI ever since the R56 model came out back in 2006, as I fell in love with the new red leather seats they were now putting in them, and thought the Black and Red combo would look fantastic!

I picked up my new MINI in January 2009, and I think it must have been one of the first Midnight Black MINIs in the country, as the colour was only just launched. I was lucky enough to be able to choose a fantastic spec with lots of toys! Full leather, Navigation System, Hi-Fi, Bluetooth, Heated Seats, Panoramic roof, Visibility Pack and Darkened Glass, as well as some nice chrome spotlamps fitted at the dealer. It looked stunning when I went to collect it. The name 'Shadow' came from my brother - he mentioned Shadow the Hedgehog (from the Sonic the Hedgehog games) who was red and black, so the name stuck! I was absolutely over the moon with my new car, and I had some lovely comments about it from my friends in the MINI community. 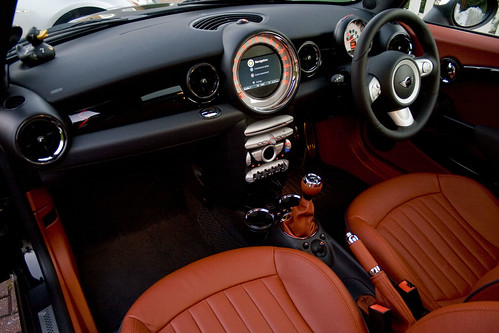 As is the case with most MINI owners, the modifying bug soon kicks in. I knew I had to be subtle with this MINI though, as there was already a lot of chrome so I didn't want to over-do anything. I was also really happy with the plain black look, so just added a Black-Jack interior mirror cover, and my grille badge from my old MINI One. As I went on runs with my local club, a few window stickers started to appear. A large group from Kent & East Sussex MINI Club went together to MINI United in May 2009, so we had matching graphics to mark the event. By this time I had managed to get hold of a set of 18inch John Cooper Works alloys, which suited Shadow's look perfectly. Not long after MINI United, I went along to the Yorkshire Dales Mini Run in July 2009, which was an absolutely brilliant weekend driving across some fab roads, amongst beautiful countryside, not to mention meeting yet more lovely people from the MINI community! 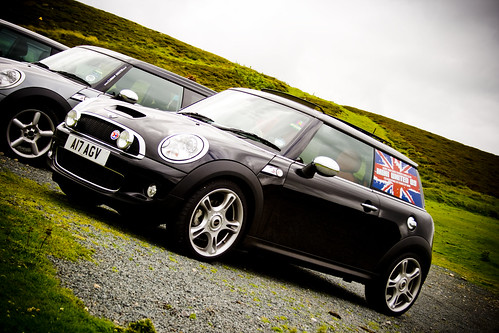 Unfortunately as good as those JCW wheels looked, they really messed with Shadow's ride and handling, so eventually I took them off and put the original 17inch wheels back on to save the suspension and my back! With the modifying bug biting again, I made a decision to get some graphics put on the car. Something that would complement the colour scheme inside and out but not look too 'in your face', so I ran a few ideas around and settled on a central deep red stripe running all the way over the car, with silver pinstripes either side. I was a little nervous about changing the look but it worked perfectly, and went so well with the red interior too. More recently, I've changed the Flame Spokes for a set of black centered Web-Spokes with some new tyres, and I reckon Shadow is just about finished now. I'm sure all MINI owners say that though, there never is an end to the modifying bug! 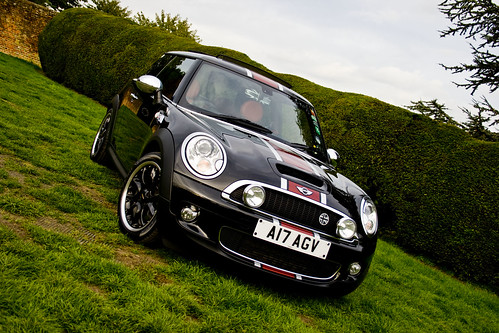 I've now owned my Cooper S for just under 2 years, and covered over 30,000 miles in that time. My MINI really has taken me all over Europe and I've seen places I would otherwise have never been to before. I've driven to Geneva and around the French Alps twice, Yorkshire, Devon and many places in between! There are always so many runs, shows and events going on in the MINI community and I've been to lots over the last couple of years, and made lots of new friends. I have a lot to thank the MINI crowd for, including meeting my wonderful partner Elliot, who is also an avid MINI fan and has been with me on lots of these adventures. He rather enjoys driving Shadow too!

Loading...
Reply Adrian Ainsworth
3:53 PM on October 20, 2010
A fantastic car and a great endorsement of all that is great about the MINI community, thanks for sharing with us.

Reply foster
2:25 AM on August 21, 2018
Nice blog.The image of the car that posted here is so nice.!!II think this is one of the best car that available in the market.This car looking beautiful.Today car is one of the popular vehicle in the field of traveling.It is more comfortable to use car traveling.Visit https://dissertationpanda.com/ to get more topics about cars.

url=https://chloroquineorigin.com/# says...
what is clonidine