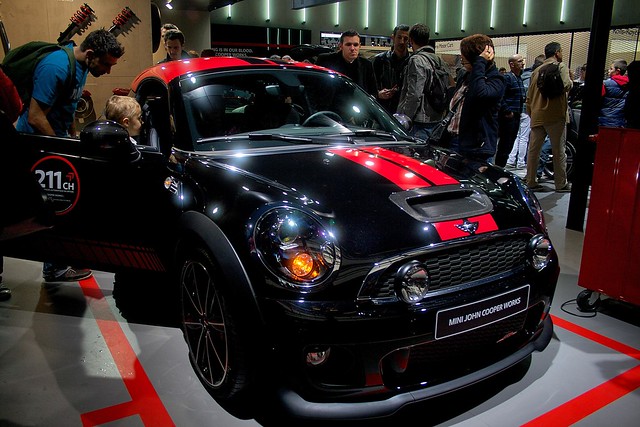 In 2006 we arranged a short trip to The Paris Motor Show, where we first saw our Opel GT and the official launch of the BMW MINI R56. We decided that it was time to repeat the trip, so Saturday saw us at The Paris Motor Show once again for a look at what MINI and the other manufacturers had to offer in 2012. Keeping us company on our look around the Motor Show were The Elf and Fandango.

We entered the show and for no real reason decided to start our tour in Hall Number One and as a result of this the very first stand we encountered was the MINI stand and the very first car we set eyes on was the new R59 MINI Coupe JCW. This was quite bizarre as this is the very model that we have just ordered to join the stable at Beastie Folly! The model shown looked spiffing in black with a red roof, stripes and the bold, fixed JCW spoiler, here painted in red to match the roof. We have ordered this spoiler on our car and this was the first time we had seen the spoiler painted on the Coupe. To our biased eyes it looked stunning and this car being the very first car we saw just put us in a good mood for the rest of the show!

We have made no secret of the fact that our view on the looks of the Coupe has chopped and changed in the past. When we first saw the Coupe concept pictures we loved it but then when we saw our first Coupe in the flesh in Liverpool when it was launched, we were frankly very negative towards the car. It didn't look right, it wasn't balanced somehow, it seemed too high and too short. However, pictures began to appear on the net with the car sporting the fixed JCW spoiler instead of the standard pop up spoiler and the car became a different beast altogether. The spoiler is much bigger and hangs back behind the car a little and now, visually the car has balance. This was how it seemed to us and on the strength of this we placed our order. Seeing the car for real in this guise has confirmed this view and we thought the car looked stunning.

The JCW Coupe was on the stand next to the MINI GP, which was officially revealed at this show. There has been shedloads of talk, review, speculation and excitement about the second generation GP and rightly so. We gave our thoughts on it, when we first saw it at MINI United earlier in the year and while it did not bowl us over, nonetheless it is a fine and desirable car. However, what we found interesting and frankly very pleasing was that in the time that we were on the stand and in truth it was a long time, the crowds were far, far more interested in the Coupe than they were in the GP. Having ourselves been somewhat uncertain of its looks, the combination of seeing it with the fixed spoiler and observing the obvious popularity of the car with the public, was truly extremely satisfying. Finally though we tore ourselves away from the Coupe.

The new Paceman was there too. An instant hit with Lady Peanut and me but a big no no with The Elf and Fandango. It is another pay more for less scenario, but get over that, it looks sexier than the Countryman and frankly anyone who tries to justify any MINI in practical terms has already missed the whole point of the MINI brand. The whole brand is a lifestyle choice, you get a MINI because you want one, not because it is better than, or more practical than something else. You buy MINI for the same reason that you would buy a Mont Blanc instead of a BIC, or a Rolex instead of a Swatch. However, if in your head you are now saying, yes but a Mont Blanc isn't that much better than the BIC and the Rolex isn't that much better than the Swatch, well you are right but for God's sake don't buy a MINI you will never "get it". 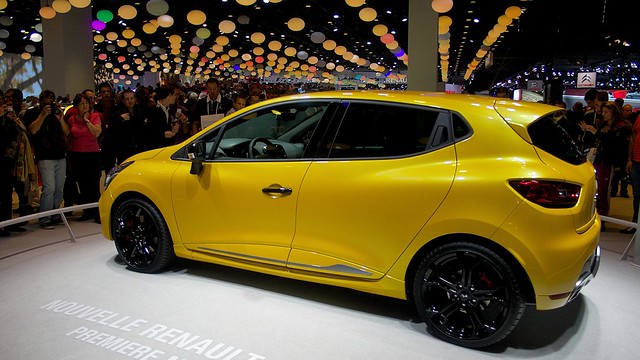 The next car to catch our eye was the New Renault Clio RS. A very fine car, a lovely colour as always but it would be disqualified in every Olympic event it ever entered because there is no way that you could get all those steroids through the drug testing. The car has grown, really grown. Lady Peanut described it as "a Renault Megane in a tight dress" and she is spot on with that description. Remember it well because the first time you see this car you will agree with her!

The Abarth stand looked splendid and  with the 500 model Fiat have eclipsed even MINI's marketing prowess with a generous helping of the "lifestyle choice"  philosophy added to the car's DNA. These are smashing cars, again from the less is more stable and they do put convincing interiors into them too. For me though, they will always be a little bit too thin and a little bit too tall. That said though, I respect Fiat for making a real fight of it with MINI in the small car Lifestyle choice sector.

Opel have entered this market too. they have made a rather attractive and well kitted out small car that to my eyes looks better than a Fiat 500. But they have called it Adam! We can rest assured then that Opel will remain the poor relation to the rest of the German car makers! It's a great little car, but it is not Citroen DS chic, Fiat 500 cute and it wouldn't know va va voom if it came along and shook its booty in its face! But for all that we still gave it a thumbs up. 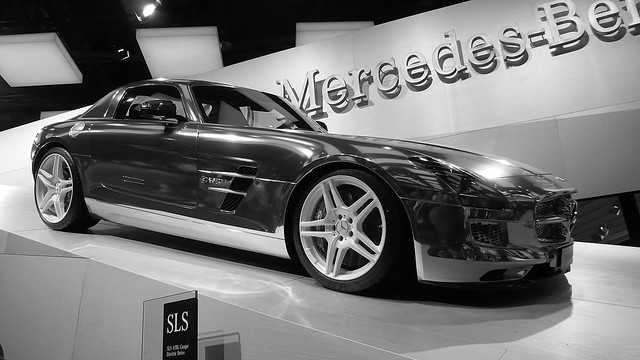 Mercedes cars were looking sexy! Yes, I did say sexy and this was vey encouraging to see. Audi have been  nodding at sex appeal for a while, but Volkswagen have just been making boxes (new cool Beetle excluded) and BMW  have lost themselves trying to understand what Metrosexual means and building tanks in the meantime!

The Subaru BRZ was there and that looked damned exciting. We missed its sister the Toyota GT86, which was a shame, as we would have liked to compare these. The Subaru looks like a lot of car for the money and this was Fandango's favourite from the show. Mazda MX5 style fun driving but in a Coupe body. A really great car and any sensible person would probably choose one of these over a hooligan MINI JCW Coupe anyday! 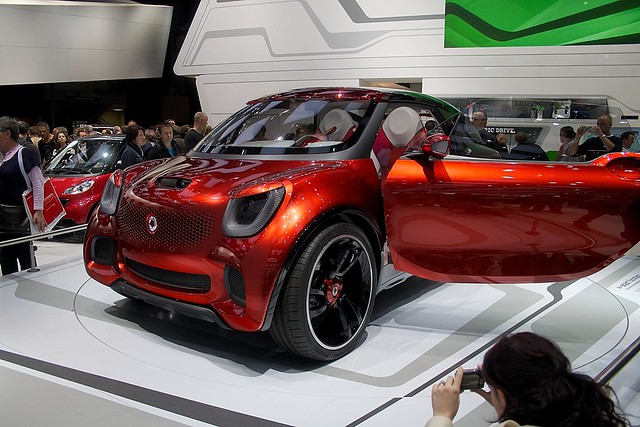 Finally, The Elf's favourite from the show was the two-seat Smart Forstars concept electric car, which did look funky (substitute "groovy" if you prefer). I was hoping to see a car to blow me away but in truth my favourite and Lady Peanut's favourite from the show, was the MINI JCW Coupe. We went with open minds but somewhere inside us is MINI, like writing in a stick of rock and this was by far our favourite from the show. We asked The Elf to photograph the day in black and white, so click on her photo to see her really rather wonderful slideshow of the day and click on the JCW Coupe to see the show in full colour. Finally, click the Instagram photo to see a gallery of all our iPhone pictures from a fun day at The Paris Motor Show. 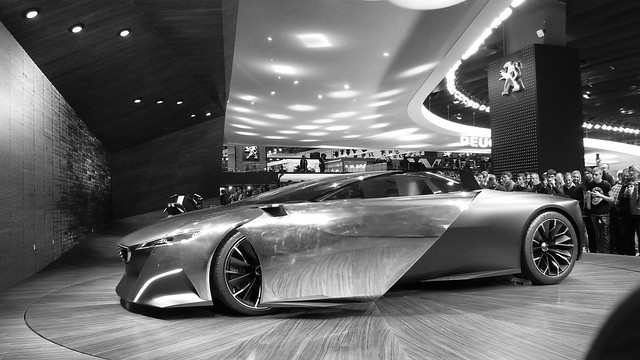 Click on the Picture for The Paris Motor Show in Black and White. Photographed by The Elf.


erectile medication where to purchase


what is zithromax prescribed for

Reply hydroxychloroquine over the counter
9:28 AM on May 29, 2021
choloquine

Reply Wertexcexia
9:52 AM on June 5, 2021
essay format essaybot argumentative essays write my essay for me https://essaywritingeie.com/