A Weekend at The Le Mans Classic July 2012 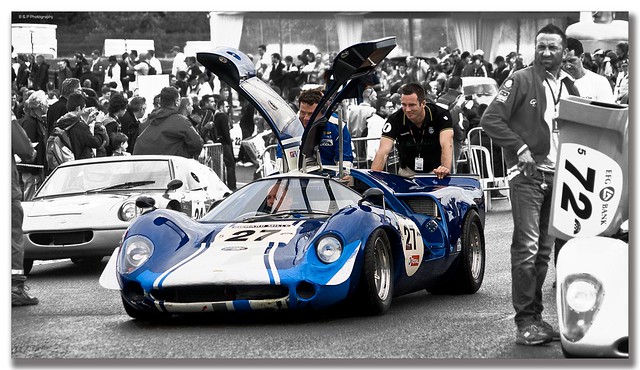 We decided to go to the Le Mans 24 Hour Classic Race in July 2012 and our friends RVW and Storm joined us for the weekend. They were going from Lincoln, so went via the Tunnel, while from Malvern we elected to cross from Portsmouth to Caen on the overnight ferry. We all booked three nights at the Oasis Hotel in Villaines-la-Juhel, which was about 40 miles away from the Le Mans racetrack. The event proved to be a cracker...

We sailed a little after 11 in the evening but the fun began as soon as we arrived to board the boat.  All kinds of exotic classic cars were waiting to board the boat and while ClubBeast our MINI Cooper S Clubman normally gets a lot of attention and second looks it felt distinctly ordinary in this fine company. We had intended to take our Opel GT, which would have looked more the part but we scuppered ourselves when brake calipers were needed for an MOT and we could not get the parts in time for the trip. Classic Porsche 911s, Aston Martins, a gaggle of Caterhams, a herd of Morgans a glorious Ford GT40 in Gulf racing colours were just some of the petrol porn waiting to board. It was a bit like Noah's Ark but for cars and the smell of petrol fumes and the noise was glorious. We were excited and the trip hadn't really begun!

In the morning we decided to lie in bed on the boat and grab breakfast en-route to Le Mans. We had previously visited Bagnoles de L'Orne a few times and knowing it to be a beautiful town we headed there for our petit déjeuner. We weren't disappointed and in a lovely pâtisserie there we enjoyed toffee jam on our croissants! Unusual but yummy. Meanwhile RVW and storm were belting from  their overnight hotel in Calais, down to our rendezvous near the Le Mans Racetrack.

Pistonheads had arranged a lunchtime meet for the Le Mans Classic on the Friday at a campsite called Le Bounty and this was where we arranged to meet RVW and Storm. We got here just before 12 and soon after sat down to enjoy homemade pie and potatoes. A nice collection of automobiles had gathered here too and a lot of interesting watches could be seen on the wrists of these petrolheads. We had a lot of fun here chatting about cars and watches and admiring the motors as we waited for RVW and Storm to join us.

After RVW and Storm were fed and watered  we took our first leisurely look at the Le mans classic, parking in our designated Blue Car Park. First at the boat and again at Le Bounty, our excitement had been mounting and finally we were back at Le Mans, 4 years after our first visit in 2008. The place was alive with cars, shops, stalls, souvenirs and sex on wheels was around every corner. We were loving it. The weather stayed dry and very soon we had walked our legs off and decided to head for our hotel.

Friday night escaping from Le Mans is something that somebody could make a movie about all on its own. It was utter gridlock and as a precaution I rang the hotel to advise that we would be later checking in. Finally we got out of le mans and discovered that the drive to Villaines-la-Juhel was almost as much fun as the event itself. It was great fun. The hotel proved to be lovely and we had a marvellous comfortable room that was such a pleasure to have as our base for three nights. We dined in the pizzeria in the courtyard that night and all shared a lovely meal. 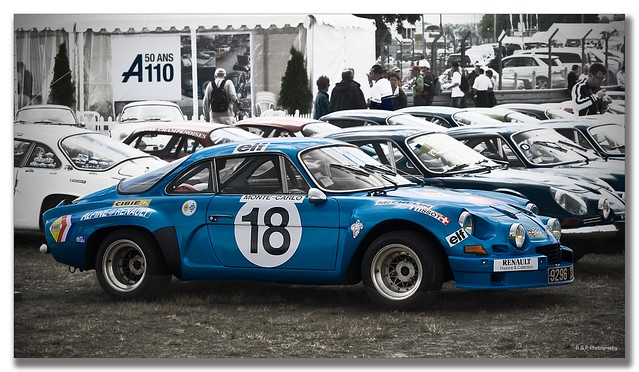 After a leisurely breakfast at the hotel the next morning we set off once more for The Classic. We got split up on the drive to Le Mans and we had more luck than RVW fighting through the hellish Le Mans traffic. He finally joined us in the event two hours after us. They do need to get a grip on the traffic issues when they organise these events. Anyway, our time was not wasted while we waited for RVW and Storm to join us and we discovered these beautiful Renault Alpines that you can see in the picture. Personally I really fell for these beauties. A modern Renault Megane RS was parked close to these and it brought home to me how big our cars have become. These Alpines have a daintiness to their beauty that the new cars have lost.

We dipped into the racing from time to time and watched a Le Mans Start, which was amazing. For me it is cars from the 60s, 70s and 80s that I enjoy the most. Watching some Ford GT40s racing was fantastic and having seen one waiting to get on the ferry from Portsmouth, this car seemed to encapsulate this weekend for us more than any other. It was a little 1:43 scale model of the 1969 Ford GT40 that won driven by Jacky Ickx and Jackie Oliver that we bought from one the stalls as a souvenir of the weekend.

Having a second generation Opel GT, it was a joy for us when we spotted a few of the Original Opel GTs from the late sixties/early seventies and it would be a dream come true if we were ever to have one in our stable. 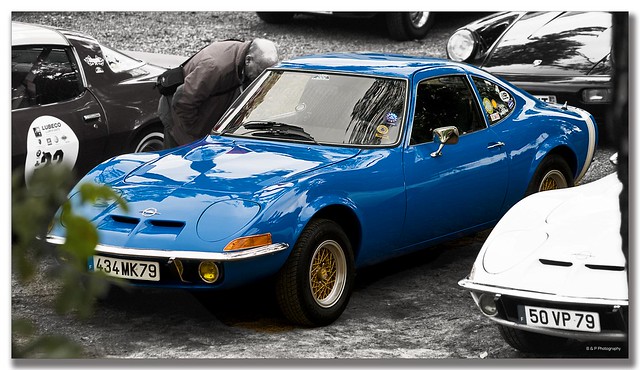 The Saturday and Sunday saw spells of heavy rain - we expected this as RVW was there and the Curse of RVW is well known from as long ago as 2006 - but it did not stop the fun. However, after a full day walking about the legs were giving in and it was nice to have a hotel to go back to. On the Saturday evening we had less trouble getting out of Le mans and broke up the journey home with a stop off in a restaurant and then a beer back at the hotel.

Sunday was more of the same, racing, drooling over the cars and souvenir hunting. The whole weekend was huge fun and should I get the chance I will be back there again in two years time when it is next on. Monday morning after breakfast we said our goodbyes as RVW and Storm headed back for the Tunnel and home. And we pointed ourselves at The Millau Bridge and... well home in the South of France.

You know sometimes it is easiest to just be upfront about things - yep life just ain't that bad!