Car adverts have to be inventive to get our attention. After all, there's no real substitute for getting into a driver's seat, pushing down on the accelerator and taking off, so advertisers have their work cut out to persuade us to buy. Here is a list of some of the best car adverts to ever grace the small screen - some breathtakingly ambitious, some fiendishly simple.

This advert is a mind-blowing feat of ingenuity - parts of the car are arranged in an ingenious way so that they interact with each other with increasing complexity, resulting in an awe-inspiring chain reaction. Guaranteed to impress.

Brilliantly tongue-in-cheek, this series of adverts for the Renault Clio told the story of an Englishman and a Frenchwoman engaged in that age-old battle, that of France versus Britain. Literature, science, arts and history - they cover just about every topic, but it's the chemistry between the two actors that really captures the audience's attention. Oh, and the narration is done by the silver-tongued Paterson Joseph of Peep Show fame, which makes it even better.

Two little boys act like world-weary, cynical middle-aged men in this advert, to hilarious effect. They discuss the merits of Vauxhall Meriva and Zafira models, demonstrate the storage and seat folding mechanisms and boast about how many people they've squeezed into the cars. The only thing they need is a conversation about Swiftcover Car Insurance to become truly authentic grown-ups!

It's a testament to the animator, Neill Blomkamp, that the effects in this advert have endured with age. Unlike so much CGI, this advert succeeds in standing the test of time because it doesn't try to be super-realistic; rather it's more about the character and humour of the robot car's movements. Blomkamp was pretty soon snapped up by Hollywood, directing District 9 and the upcoming thriller Elysium.

5. Peugeot - Take My Breath Away

A golden-oldie from the 80s, this ad for the Peugeot 405 was ground-breaking in its day. It uses quick cuts, visually arresting angles and a soaring soundtrack to show the car performing like a dream, and has no voiceover, which is still unusual to this day. It also contains an exploding billboard, something sorely lacking in many modern adverts!

Car Of The Week -The Mini-inspired Luxury Supercar

Image courtesy of 246-You

Who doesn’t love a classic Lamborghini? Not many people and it’s a big year for the luxury Italian car giant as it celebrates its 50th birthday with the tagline “100 years of innovation in half the time”. A bold claim but the company has come a long way since its inception in 1963, with well-known and desirable vehicles from the Countach, through the Diablo to the Aventador now firmly established in luxury motoring circles. However, did you know that one of their earliest sports cars was inspired by the good old Mini at the time?

While you can find many Lamborghinis on sites such as Car Sales, it’s unlikely you’ll locate a Lamborghini Miura as only around 750 were ever made and they now change hands for up to £750,000. So why did a car originally started as a side project by Lamborghini engineers become such an icon?

The Lamborghini Miura, the company’s first mid-engined two-seater, was conceived back in the early days of the company, first appearing on sale in 1966. And it owed a lot of its engineering to the Mini. Lamborghini Chief engineer Gian Paolo Dallara, who went on to become involved in Formula One, including designing cars for Frank Williams, was inspired by the revolutionary positioning of the Mini’s engine. Mounted transversely as opposed to longitudinally, Dallara took this idea and bucked the trend in engine positioning in road-going sports cars of the time. This allowed him to produce a chassis, but only a chassis, which was shown at the 1965 Turin Motor Show.

It’s testament to the confidence that the company had already inspired in its abilities that this chassis led to orders on its own, before the bodywork had even been designed, never mind finalised. Only at this point did the company turn to stylist Marcello Gandini to clothe the car in its iconic bodywork.

Working with a very small, very young team of designers, engineers and draughtsmen, Gandini and Dallara went on to produce what is often regarded as the first supercar. A powerful V12 engine so impressed the well-heeled residents of Monte Carlo that a single revving of the Miura’s engine in the principality’s Casino Square was enough to secure the company 17 immediate orders.

Having been inspired by the Mini, it’s no surprise then that it was the Miura that was chosen to feature in the opening sequence of classic 1969 film The Italian Job, where three Mini Coopers stole the show later on. And it will be no surprise if the Miura is well represented in this year’s Grande Giro Lamborghini, a 1,200km rally through Italy, ending at the manufacturer’s headquarters near Bologna, to celebrate the company’s half century of innovation – albeit built on the design of the humble 1960s Mini. 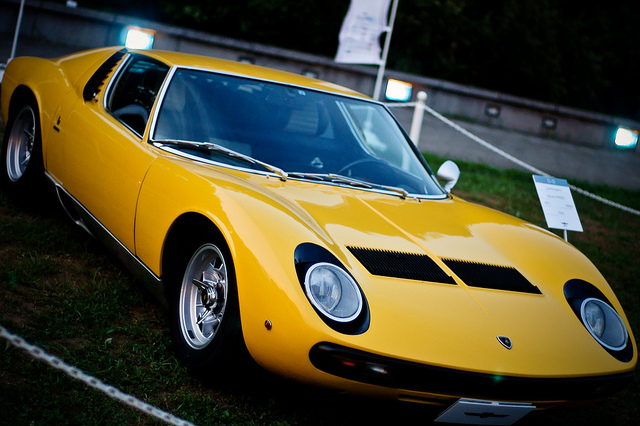 Movie of The Week - Whatever Happened to Style?

“Whatever happened to style? Where has the glamour gone? Wasn’t too long ago. America had it. Looking and feeling like a million bucks.

“It was practically a birth rite. We didn’t race from A to B. We cruised. Going for a drive was a big deal. And when we arrived . . we arrived in style.”

This ad was first aired at the 2011 Golden Globes Awards and is one of the most stylish adverts that I have seen in ages but is there an irony here? I mean are the new Chrysler's really synonymous with style and glamour? They are on the right track with adverts such as this but I doubt that the showrooms can live up to the expectation created by this ad. That said, you can chauffeur me to a premiere in a 300C anytime!

Movie of The Week - Dirty Woman

Dirty Woman is the Beastmaster song that should be on every iPhone or iPod in the land, quite simply and unapologetically a legend of a song and a brilliant driving tune!

You can Download it by clicking on the front cover for the link! 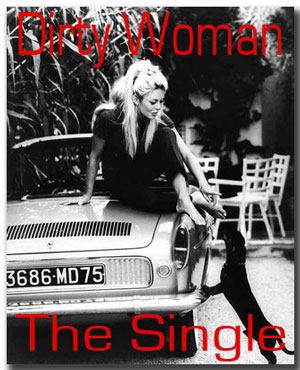 Another Blog from the OLDIE

I have fallen victim to watch phobia. This has been a problem for a long long time but I have managed to kept it under control.

But recently I have been put under GREAT pressure from a fellow watchaholic.

Having been promised a trip to Le Mans  with the carrot of owning a Christopher Ward DBR1 ( which commemorates this great circuit) I cracked and bought one.

Well now that I have had a few hours to admire my new watch, I must say I am impressed with the quality. The packaging was very good,but nothing like the inner box when I opened it. It just screams at you. I own an Omega Seamaster Planet Ocean and I would put the presentation on par with it.

The watch is very well put together, finish is excellent and the leather strap oozes quality right down to the stitching. Being used to plainer dials, I find this one a little busy but I am sure I will like it even more after a few days of wearing.

The only criticism I have is the clasp on the strap. I find it a little cumbersome to do up, not like a metal bracelet, but again I suspect time will heal that part of the equation.

So overall more than pleased with my FIRST CW watch and waiting impatiently for the arrival of my second a C90 Becketts hopefully early December. Now some pics. 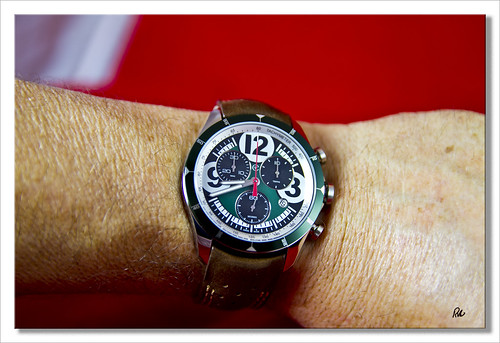 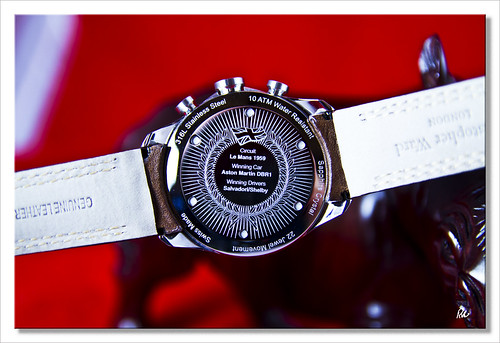 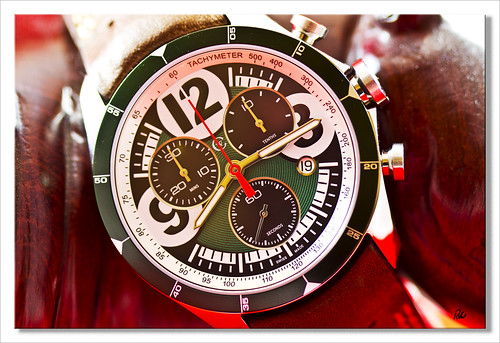 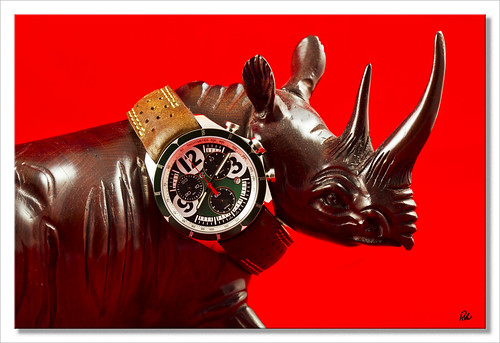 Three couples hit the road on a mad-cap jaunt from London to Monte Carlo to discover the genius, glory and grub of France in this brand-new series for ITV1. 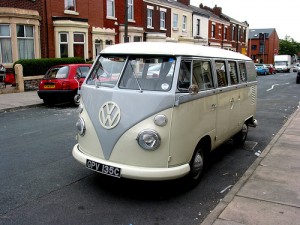 Paired up to embark on this travel adventure are Jack Dee and Ade Edmondson, in a VW camper van, Jodie Kidd and Julian Clary, in a Bentley convertible and Penny Smith and Rory McGrath, in a union jack bedecked Mini Cooper.

But this is no simple holiday; the couples are in competition to get under the skin of France and discover what makes our closest neighbour tick. As their journeys unfold taking in the stunning French countryside, winding around breath-taking mountains and cruising along the coastal roads the couples are tasked with collecting a total of three items that best represent the head, heart and stomach of each of the regions they are passing through.

The intrepid explorers are followed as they each find their own route through France and at the end of each stage of their journey they are judged on what they have learned and collected along the way. The overall winners are revealed in the stunning setting of Monte Carlo in Monaco.

Monte Carlo or Bust is produced and directed by Andrew Fettis. The executive producers are Richard Cowles and Griff Rhys Jones.