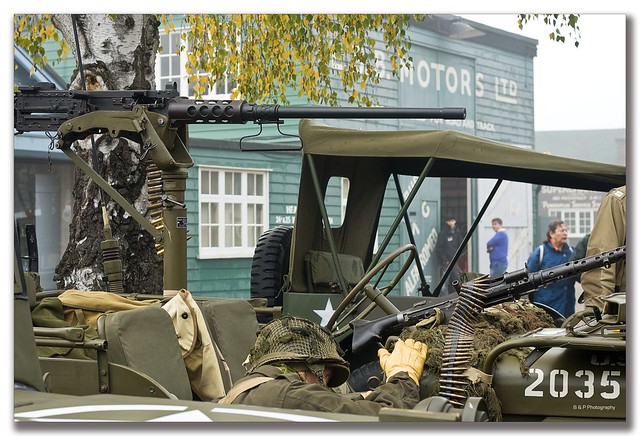 In November we spent the day at the Brooklands Motor Museum with my cousin Lorraine and my Uncle Jim. The day we went there was also a special exhibition of military vehicles and I have to say it all made for a very enjoyable and interesting day.

We have been to the Mercedes Benz centre which is next door but this was our first visit to the museum and put simply it is well worth a visit. the museum is also a museum of aircraft and Concorde is also on display there. This is a gorgeous aeroplane and I cannot help but think when I see it that if the Americans had built it, it would still be flying today. 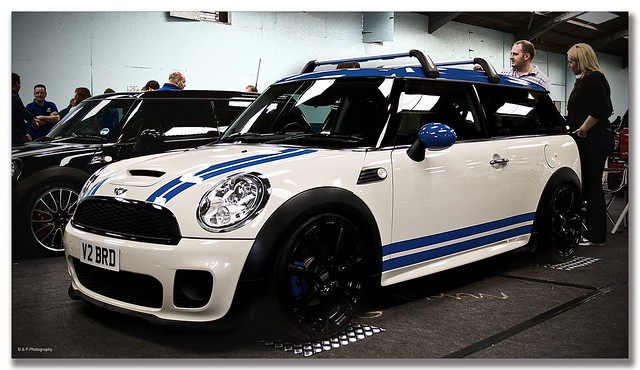 The Malverns MINI Show really is our local MINI event being less than a mile from our house. We missed it the previous year but decided to go again this year with the Clubman Register. Altough the event is primarily for classic minis it is nonetheless a very enjoyable event for new MINI owners and we enjoyed it as a great way to catch up with old friends and new from the MINI community. This MINI belongs to Brett who owns and runs the Clubman Register forum and it really is a cracking clubbie.

A great day and thanks to all who came.

My mates from work at Exception PCB  clubbed together to treat me to a Siverstone Single Seater Thrill and to make it all the more fun I asked my pal RVW to come along and do it with me. We met at Siverstone at ten and Fandango and the Elf came along to capture it all on film.

The photos and video taken by fandango tell the story, it was a fun day out, which we both enjoyed immensely and I for one certainly learned a lot from it. Encouraged by this, I think the next Siverstone Experience will see peanut trying out the skid pan!

Click on the photo below to see a slideshow of pictures from the day all courtesy of Fandango. 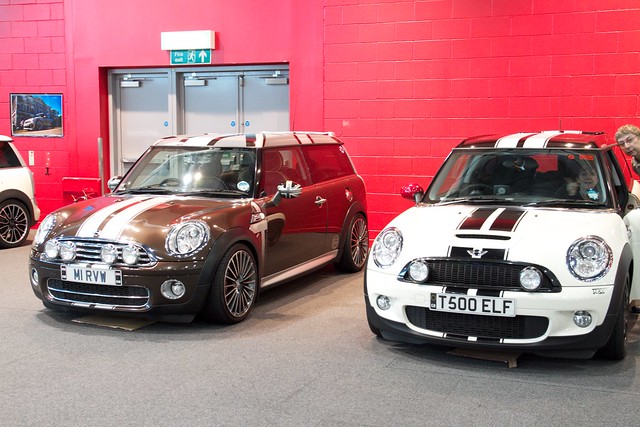 The start of October saw us heading for Liverpool to go to the New MINI Show held at the ECHO Arena at the Albert Dock. This was the second year of this show and our second year attending. The show was organised by a long standing MINI enthusiast and HIFI expert Mikeythe MINi from his website www.newminishow.co.uk.

The day coincided with the launch of the new MINI Coupe but none were to be seen at the show, so we took a half hour walk to the local Williams garage to view one.  To be honest that says it all really. The show did not pull off having one of the new cars on show which was a great shame but hinted at the lack of substance in the show. Yes there were a few traders there and it was interesting seeing the seat recovering and the roof wrapping and so on but there was just not enough to keep you entertained for the whole day and a walk out for pizza combined with a look at the new Coupe was a welcome break.

Credit to Mikey the MINI for his sterling efforts  but it just lacked a little something and in truth we thought the first year was a better year. Still onwards and upwards and we shall try and give it our full support if it goes ahead next year.

What we did enjoy though was catching up with old friends at the show for a good old natter and the way just seeing a load of MINIs herded together rekindles the enthusiasm for our MINIs. Our good pal RVW was on hand with his camera for the day so he grabbed a few shots while he was out and about at the show and you can see these by clicking on his photo above.

Our next MINI show is at The Malvern Showground on the 23rd October - see you there!

This is primarily a meet for classic Minis but Newminiseverns flies the flag for BMW MINIs at the event and we went along to support it with ClubBeast. We had been looking forward to it for a good while and with all the good weather we have had lately it promised to be a great event.

Unfortunately the bad weather returned with a vengeance and we woke up to the kind of rain that promised to be there all day long. Still we set out and yes when we got there it was pouring down. This was a great shame as it reduces the number of Minis who turn up for the day and also the number of traders as to be honest they were definitely not there in force and there was nothing to interest the BMW MINI owner. 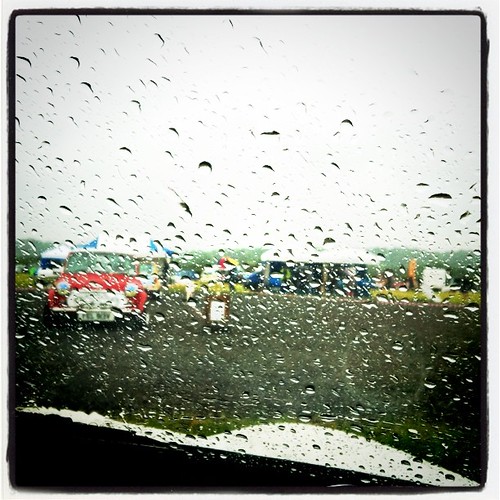 On the plus side, it was great for me to catch up with some old friends and new and it was great to see, Aston, Minisoopercooper, Rakey, Yeoda, Matthew, Scooby and all the other MINI fanatics that we chatted with.

In truth it was hard to find highlights on such a miserable and wet day but for me there were three highlights at the meet. First Rakey's GP; as many of you know we have had a hankering for a GP for a long long time now and seeing one yet again just reinforced that desire. We are both convinced that we need a supercharger in our lives and we both feel that a GP would fit the bill nicely. Maybe it is still a dream but without the dream you can't have the dream come true! Secondly, one girl whose name escapes me brought along her Cooper which was finished in a very vivacious pink/cerise colour, with colour coded wheel arches, skirts and interior. Not a car for me but I did like it a lot and the polished alloys really added to its bling factor. I loved it I have to say! Thirdly, though perhaps due to the somewhat poor turn out ClubBeast actually won a plaque for the "headturning factor" and me and Peanut were pathetically pleased about this!

Due to the awful weather we left a little after 12 and did not manage to go around photographing the event. However, we did take a few quick snaps of some but not all of our favourite cars from the event - sadly though I missed taking the pink wonder MINI! Let's hope that next year's event is blessed with better weather and we can make a weekend of it with some camping the night before too! 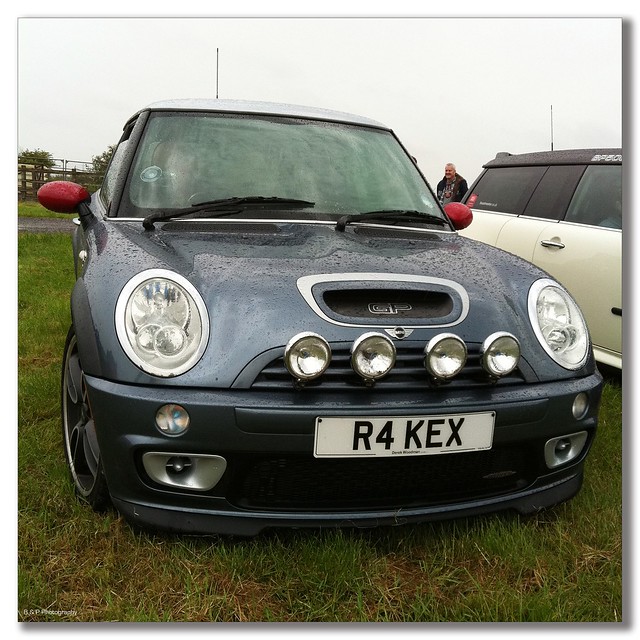 We bought tickets for this event some time ago using a Pistonheads offer making it a good value day out. We arrived early, meeting our mates RVW and Storm just outside the entrance. The weather was fine and sunny but the wind was something else and blew a gale all day. It was pleasant to be able to stroll around the paddocks where they were prepping the cars and seeing work in progress. The range of support varied from an original Morgan three wheeler parked up next to a hay bale, to a full on artic with awning  and garage facilities. It was such a busy buzzing place it was easy to get into the mood of anticipation and competition. We strolled around for a while then went under the tunnel to visit the trade stands on the infield, which consisted of all types of motor memorabilia ranging from model cars to books, posters, clothing and even a BRM watch stand. At the far end was a stand nicely positioned with a view of the final bend which gave us a welcome sit down for 20 minutes or so while we watched some racing. We walked back to the centre of the infield and had a look at some of the car clubs displayed there, in particular the Morgans, Porsches and Corvettes. It was still cold so we decided to head back to the cars for a spot of lunch and a brew where it was slightly less blowy, but the wind still made it a while before the kettle boiled. 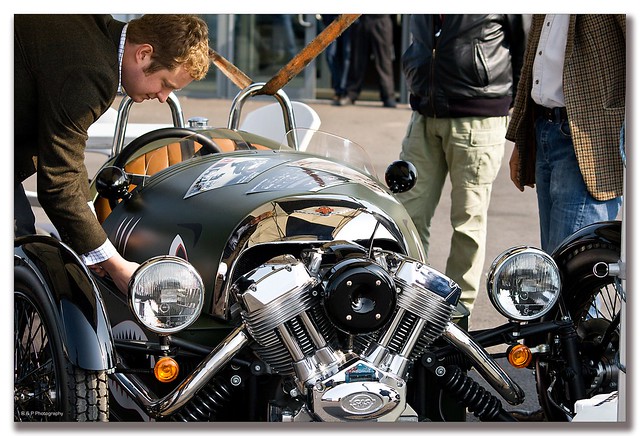 When we returned to the infield more cars had arrived at the club stands and we spent time sitting in the sun and chatting to one or two owners. 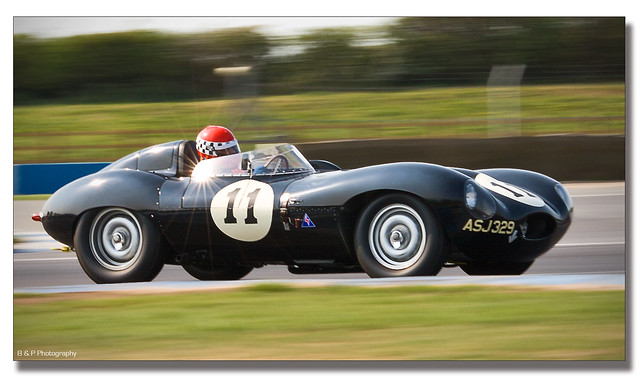 Back to the stand then, where we were in time to see the brand new Mad Jack race for classic racers, named in honour of Mad Jack Shuttleworth who won the first Donington Grand Prix in 1935, with entries from huge Bentley Blowers to the tiny Morgan three-wheeler we saw earlier in the paddock. It was interesting to see these drivers struggle with their cars on the bends using all their strength to get round corners with their large steering wheels - no roll bars or power steering on these babies. To their credit there were no crashes that we saw, but many blips and wobbles and comings off the track, clouds of dust and yellow flags, as well as being a pleasant thing to listen to - no screaming roar to burst your eardrums but rumbles, roars, pops, bursts of flame and gurgles of different notes as all these cars were entirely different in make and age, their only commonality being that they were pre-war sports cars. It made us realise that we have a greater love for classic than modern racing and so plans have been hatched for more trips to such events next year.

This was the first year of the Donington Hitoric Racing event but in our view it was a great event and we look forward to next years meet!